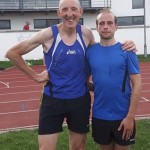 Dave and Donnacha only started cycling together on the tandem in January – but  they have made steady progess.

They have earned selection for the world Triathlon Championships in Rotterdam in September.

2018 is the road to Tokyo Olympics , and we are hoping to be able to support them with their goals of a win in the Invacare league , and a National Track and Road title.

Dave will also line out for our Track Team in the National Masters Track Championships in 2017.