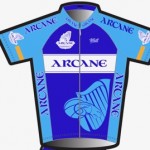 The Arcane Track Cycling Team showed their teeth at the final Major Elite Track Event of 2017 , winning five of the six Elite Medals available on the day,  in the Leinster Track Cycling Championships .

Newly Crowned Irish National Sprint & Keirin Champion, (& 2017 Team Sprint Silver Medallist) Tony Mairs got the Team off to a great start by winning the opening TT . This result was never in doubt , however Tony was disappointed that he didn’t break his own National record on his way to the Gold .

Darragh Zaidan rounded up the podium for Arcane Cycling Team taking Bronze (proving that he can Sprint with the Sprinters when a medal is at stake) for a first ever complete Team Leinster Track Podium .

The team went into the Elite Scratch race with the goal of winning the title , and Zaidan didn’t disappoint , The former National Pursuit Champion (& Current National Scratch and Madison Silver Medallist)  showing no pressure with the favourite tag – winning with a trademark long attack, after good early attacks from his team mates Kyle Crotty, Andre Grennell and Ryan Byrne . Sam Gilmore would put in a great ride to take a Bronze Medal , and bring the team total up to Five Medals (Two Leinster Champions) from six medals available .

A nice end to the season for the ‘Arcane Cycling Team’ & ‘Arcane Women’s Team ‘- and we are already planning 2018..