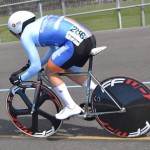 Darragh Zaidan was rewarded for his great performance in the Newport G.P ,with a recall to National Team Duty for the Revolution Series at Lee Valley Velodrome, London next weekend .

Now working full-time , the multi National Medallist & Irish Champion remains as one of the best riders in the country and he will partner upcoming Irish International Xeno Young in the televised sold-out Track Event.

Created in 2003 by FACE Partnership and the National Cycling Centre in Manchester, over the past 12 years Revolution Series has grown into the most successful elite track cycling league in the world.

Revolution Series has two simple aims: to provide a competitive environment in which Britain’s best track cyclists can develop their talent, and to provide fans with thrilling, world-class track cycling entertainment.

There are four main elements to the racing: the Champions League, Women’s Championship, Future Stars and elite sprinting.

The Revolution Champions League is the centrepiece. Pro teams like Team Sky. Orica-Scott and JLT Condor compete in Championship races at each round. Consistency of performance and teamwork are the keys to success with points collected in all races. These points accrue in a league table across the season and, quite simply, the team with the most points at the end of the season is the winner – more details on the Champions League format.

Past winners of the Future Stars competition include Steven Burke and Pete Kennaugh, both of whom won team pursuit Gold at the 2012 London Olympic Games – click here to see the Future Stars Hall of Fame.

Revolution Series attracts capacity crowds across the season and is increasing its reach across the UK. The 2017 season will see feature world class velodromes in London, Glasgow and Manchester.