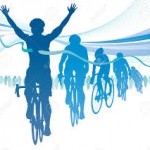 Ryan Whelan Retains His National Title:
Arcane / Adamstown Cycling Teams Ryan Whelan Won Gold at the National Track Championships at Sundrive Velodrome on Saturday (July 18).The young Cyclist was competing in the Under 14 Category in three events – Time Trial, Scratch Race and Sprint. Ryan has amassed a collection of National Titles since he first started racing at Under 10 Level – but it was his coveted National Sprint Title that he had hoped to retain.
The young rider faced stiff opposition, especially from a strong Errigal Team (Donegal), and the pressure was on when he qualified for the final in 2nd place, and not his usual top spot.
However , Ryan showed his Sprinting ability by winning the Final by three Bike lengths to take the Gold back to Adamstown.
Ryan also won National Medals in the Time Trial (Bronze) and a Silver in the Scratch race (After a photo finish) to complete a great day of racing.
Ryans brother Ben was also in action in the Under 12 events, performing well but narrowly missing out on a medal.