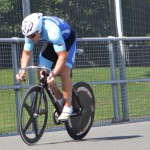 As defending champion, Mairs was scheduled as the last ride in the event, and he was left in no doubt of the task ahead. Current Irish National Sprint Champion Eamonn Byrne (Sundrive Track Team) had already broken the Irish record to put himself in the gold medal position. Byrne’s record would be short-lived as Mairs smashed the new time to take gold and defend his Leinster Crown.

Barcelona Track GP: Zaidan Performs well in Spain
Darragh Zaidan was in international track race action at the Residencia Agora Velodrome in Barcelona at the weekend also. Zaidan got his international season underway with a great start in his two events, and put in a solid ride taking two top 10 results in the UCI ranked event.

The ArcaneTeam are sponsored by ‘Bicycle Design Centre’ (Kildare & Naas) and are competing on Custom Frames Handbuilt in our Kildare Workshops.