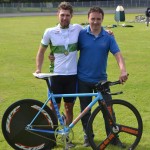 Zaidan Qualified for the Gold / Silver Ride-off with the fastest time , but he still had to put up a massive fight against Con Collis (UCD) in the final , where Zaidan was trailing until the final lap – where he finally overalled Collis to become Irish Track Champion.

Tony Mairs and Marc O’Brien were competing in the Sprint , and both qualified for the last 16 .

However , Mairs was unable to compete in the final due to illness , and was awarded the Silver Medal (His highest ever National placing).

Zaidan also competed in the Scratch Race on Sunday ,  and soon went clear of the quality field in a four man break .

Pre race favourites Zaidan and Javan Nulty (SC DE NICE JOLLYWEAR / France) went in to the final lap locked in a sprint to the line , with Nulty edging Zaidan at the finish.