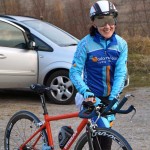 Kennedy is sponsored by Kildare towns Bicycle Design Centre, and was riding on a specially designed Arcane Steel / Carbon Bike (Designed and Manufactured in Kildare).

Róisín attacked early on the first lap , quickly building a lead of several minutes at the finish of the 48 km event.

Róisín was delighted with her win – the multi National Medallist , and former International has now won Elite Women events for over 12 consecutive years on the domestic racing scene.